Everything is run on an energy 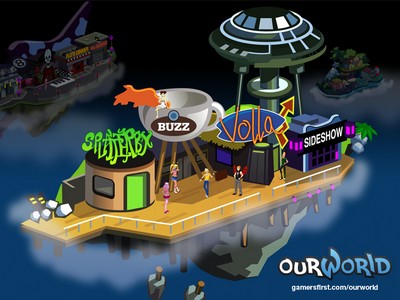 source called Flow. Society is
run by ‘The Council.’ This is a
group of Flow moguls who
control all of the wealth in Down
World. They’ve been running
things for as long as anyone can
remember. Society is very ordered
and very repetitive because this is
what The Council says will yield
the greatest amount of Flow.
People are expected to fall into a strict routine of ‘work, eat, sleep’ to maintain the power source the cities run on. The general populace is kept in line by the threat of a ‘Flow shortage’ if they don’t perform the menial tasks assigned to them daily. Life is very boring.

While training in school for her assigned career Azia begins to question society and their methods of Flow collection. She got into the habit of sneaking off during her daily allotted ‘sleep time’ to work on a theory of modifying the current Flow collection method. She discovers that Flow can be created by all people when playing games or doing fun things, and in a lot higher quantities than the amount collected doing boring, repetitive tasks. She creates a device that can harness the Flow generated from these activities. She hypothesizes that with her modifications, there could never be a Flow shortage.

Azia presents her theory to The Council in hopes of radically changing society. The Council, fearing the loss of control over their boring cities, destroy research schematics and blueprints of her invention, sending her away.

Azia grabs her two best friends, Jordan and Caden, and runs off into seclusion to remake the technology they took from her.

Azia and her two best friends decide that this is their chance to show how happy and prosperous people can be without the rigid control of The Council. Jordan starts recruiting like minded kids to help as Azia and Caden work on perfecting the technology. Early recruits include Zoe and the designers, Derrick, Vernicia, Collette, Otto, Niccolo, Ani, and Edwin. Azia stabilizes her higher yield method of Flow collection, and creates the first floating island run entirely on fun and games, powered by all her new friends and anyone else who wants to come have fun.