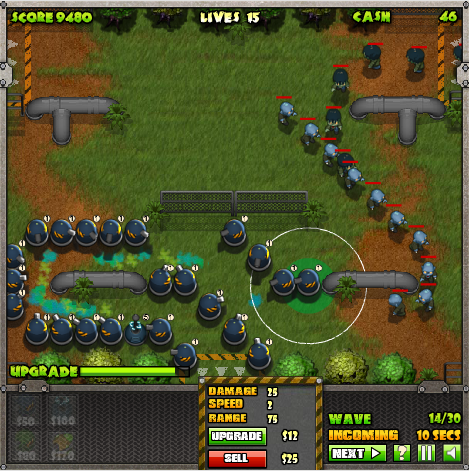 This week we’ve got ourselves a Tower Defense game with a twist- you’re defending against zombies. Hundreds, even thousands, of zombies are trying to get through the gates, and you must keep them at bay using an array of towers. There are several different kinds of zombies that must be killed, and several different towers to kill them with. This game, Zombie Defense Agency, is located under Strategy Games. Cammie in Beat Street also has three challenges to play this game, where you can win Flow, badges, and Music Boxes! It’s also great for earning Flow on its own.

Here are some tips:

~As the game progresses, the zombies will get harder and harder to kill, with more and more special abilities. At first, these abilities just include moving fast, but keep an eye out- in the last few levels, there are zombies that can destroy your towers!

~The progress bar in the lower left shows how close you are to unlocking a player upgrade, such as a new tower or more money.

~You’ll earn 12 “cash” for every zombie you kill. This can be spent buying and upgrading towers.

~The last tower is worth the money! It has great range and damage.

If anyone has a favorite game that they’d like to suggest for the coming weeks, feel free to leave a comment on this post or on my forum profile!

(Ah, also, to clear up some confusion from last week, no, Monster’s Den is in no way related to GaiaOnline; I set GaiaOnline avatars as our images because I like them. The default images for the characters in Monster’s Den are kind of ugly, so I like to set other ones. Also, these games have been around for a while; most of them are not new, just featured because they’re great games.)